In the upcoming winter flight schedule for 2017/18 Lufthansa, Swiss International Air Lines, Austrian Airlines, Brussels Airlines and Eurowings will be offering their customers precisely 12,461 frequencies, in total 24,922 weekly flights worldwide. Over the winter, they connect 288 destinations in 106 countries. In addition, there will be more than 18,000 codeshare flights with around 30 partner airlines supplementing the respective flight programs, offering passengers an almost worldwide network of routes. The winter flight schedule of the individual Group airlines will come into force on Sunday October 29, 2017, and will be valid until Saturday March 24, 2018. 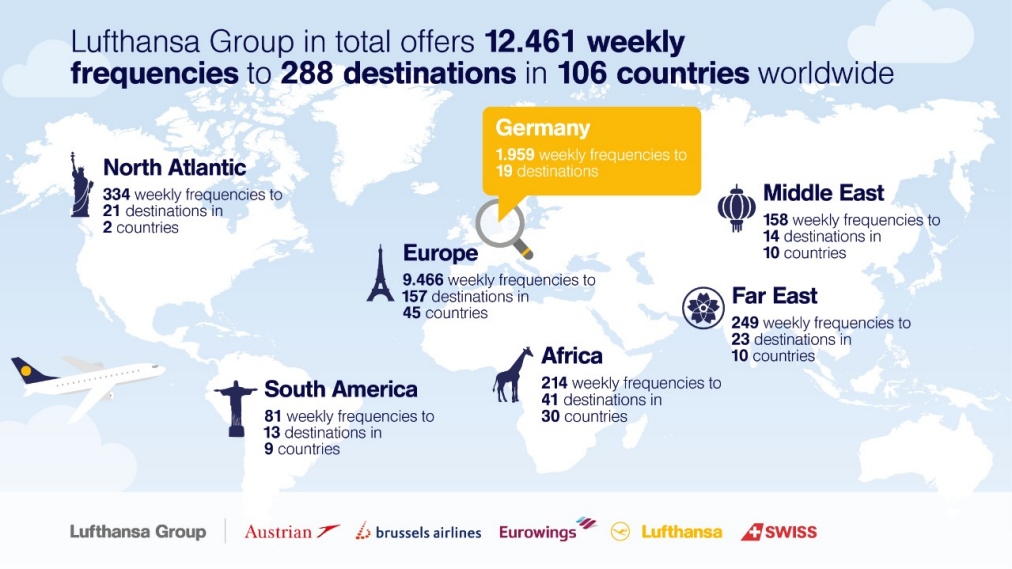 Lufthansa:
From November 8, 2017, Lufthansa will offer flights between Berlin and New York (USA) five times a week. Every Monday, Tuesday, Wednesday, Thursday and Saturday, an Airbus A330-300 will take off heading west. Lufthansa will thus be once again basing a long-haul aircraft in the German capital, for the first time since 2001.
Lufthansa resumes the Düsseldorf – Miami (USA) connection from this coming winter. The service will begin on November 8, 2017, and flights will take off three times a week (Monday, Wednesday, Friday).
The winter flight schedule will see Beijing (China) becoming a new A350-900 destination for flights from Munich. Lufthansa passengers can thus travel to the Chinese capital for the first time on the Airbus A350-900. It will take off four times a week from Munich. After Hong Kong, Beijing is the second most important Lufthansa A350 destination in China. In addition to this, there will also be Lufthansa A350-900 flights leaving from Munich for Boston (USA), Delhi (India) and Bombay (India).
There will also be a wide range of flights in the upcoming winter from Munich to Charlotte (USA), Denver (USA) and Tokyo (Japan).
From the end of October, Lufthansa continues to expand its network in Europe in winter Lufthansa will start operating flights from Frankfurt to Pamplona (Spain), Genoa, Bari, Catania (all in Italy), Kuusamo (Finland), Cluj and Timișoara (both Romania) are the new destinations from Frankfurt. There will also be flights this winter from Frankfurt to Santiago de Compostela (Spain), Reykjavik (Iceland), Palermo (Italy) and Paderborn.
With Nantes (France), Glasgow (UK) and Santiago de Compostela (Spain), the flight program from Munich will now be expanded to include a number of further attractive city destinations.

Swiss International Air Lines and Edelweiss:
In the upcoming winter flight schedule, another destination will be added to the route network of the Boeing 777-300ER – Swiss will now operate its flagship aircraft on flights to the Brazilian city of São Paolo. As regards its short-haul routes, Swiss will be flying to Breslau and also to Niš in Serbia for the first time. In addition to this, Swiss will be expanding its flight program to include Berlin and Düsseldorf. They will also be increasing the number of flights taking off for Moscow. The Swiss affiliate Edelweiss will expand its flight program to include the Canary Islands, among other destinations, and will also be operating flights to Orlando (Florida) for the first time this winter.

Eurowings:
Eurowings are continuing to expand their long-haul program in their winter flight schedule for 2017/2018; but customers can also look forward to new destinations on both short and medium-haul routes. One highlight in the new flight program is a further intercontinental service from Cologne/Bonn – from the end of October, Eurowings will be flying once a week to Cape Town, South Africa’s second-largest city.
There is also some exciting news in Düsseldorf – from this winter, Eurowings will be expanding its long-haul program from this airport too. Eurowings will be operating flights from Düsseldorf to four dream destinations in the Caribbean. Punta Cana in the Dominican Republic with two flights a week, Puerto Plata every Thursday and Varadero (Cuba) every Friday. The quartet will be completed by Cancun in Mexico. This route will be served by Eurowings once a week from December 18 onwards.
Passengers will also be able to fly from Düsseldorf to Zagreb in Croatia three times a week, and to Marrakesh in Morocco twice a week, as well as to Hurghada in Egypt once a week.
Their new base in Munich is a further focus of expansion for their winter flight plan. Here, new destinations will include Fuerteventura, Lanzarote, Tenerife and Gran Canaria, all on the Canary Islands, as well as Marrakesh (Marocco) and Lisbon (Portugal).
The airline will also fly to two new destinations in the UK from Salzburg – four times a week to London-Stansted, and to Birmingham and Manchester both twice a week.

Brussels Airlines:
Brussels Airlines welcomes the upcoming winter season with no less than 10 new ‘sunny’ destinations. Starting October 29, the leading Belgian airline will connect its hub at Brussels Airport two times a week with Cabo Verde and the Red Sea zone of Egypt (Hurghada and Marsa Alam airports).
Brussels Airlines also launches a strong offer to the Canary Islands with new services to Lanzarote and Fuerteventura plus frequency increases on the already existing routes to Tenerife and Las Palmas. From February onwards Brussels Airport will also be connected with Palma de Mallorca and Almeria. Other newcomers in the winter timetable are Enfidha (Tunisia) and Agadir (Morocco).
Funchal (Madeira) and Bordeaux (France), two destinations that appeared so far only in the summer timetable, will now also welcome Brussels Airlines flights during the winter.